He is considered to be one of the greatest German film stars, Hans Albers, known as “Der blonde Hans”, a man made for the cinema. He was an actor, singer, idol of the Germans – and darling of the Nazis. Nevertheless, he could not protect his great love, the Jewess Hansi Burg. In 1938 she had to flee to London from anti-Semitism in Germany. But Albers himself stayed in Germany and continued to film, driven by a desire for a career and the call of money. In 1946, one year after the end of the Second World War, they meet again: Hansi Burg returns to the land of the murderers of her parents in the uniform of the British Army and visits Hans Albers in his villa on Lake Starnberg. He lives there with another woman. The rival has to go, then there is a tense debate. For a day and a night, the blonde Hans has to face uncomfortable questions and even more uncomfortable truths. 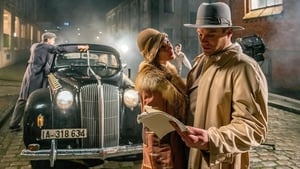